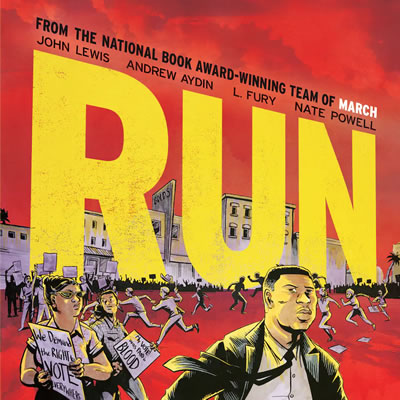 A sequel to the "March" trilogy of graphic novels is set to be released this coming August. The original series was a #1 New York Times bestseller. The graphic novels are an autobiographical look at the life of the late civil rights icon and congressman, John Lewis. The book, "Run: Book One", will be written by Lewis' long time collaborator Andrew Aydin and illustrated by Nate Powell  and L. Fury.

The sequel will be a continuation of the life story of John Lewis and the aftermath of the Selma voting rights campaign.

"Run recounts the lost history of what too often follows dramatic change—the pushback of those who refuse it and the resistance of those who believe change has not gone far enough. John Lewis’s story has always been a complicated narrative of bravery, loss, and redemption, and Run gives vivid, energetic voice to a chapter of transformation in his young, already extraordinary life." –Stacey Abrams